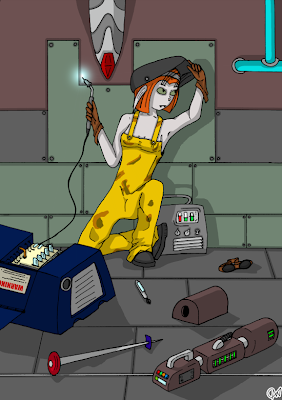 Georgina, George to her friends, is the Pratarian engineer and mechanic of the transport ship Haphazard. Although she is the youngest member of the crew, she is the most level-headed and dependable person on the ship.

Having grown up on a freighter, life aboard the Haphazard is just like the old days. Her parents ran a trade and transport company, and the company flagship, the Vesta, was also the family home. Being home schooled meant George had a colourful and varied education as she learnt a lot about life in the galaxy from the temps and occasional spacers that dropped by for work or trade. Taking an active role in the family business from a young age, she took over running the maintenance of the ship when she was eight. The old man that maintained the ship was killed during a pirate raid near the end of the Akiran War, though not before imparting as much of his knowledge as possible on a certain young and impressionable girl. Over the years she continued to improve, and you’d be hard-pressed to find a better engineer in the galaxy, even in the highly trained and polished ranks of the Space Corps.

The war started when George was a mere kitten, and she was called on to help the family whenever possible due to the constant threat of attack by Akiran ships or pirates. They survived many raids and were paid well for managing to transport supplies through enemy lines to the outlying colonies that were under siege. Once the war ended, business continued to be profitable, that was until a particularly messy pirate raid. The pirates managed to severely damage the Vesta and caused an antimatter breach resulting in a full-evacuation of the ship. Most of the crew, including George, made it to the escape pods and found harbour on the other ships in the fleet; however her parents were killed while trying to make sure everyone else made it to safety.

Alone and not knowing any other life, George signed on with Tezic Odriro to work the recently vacated engineering position aboard his transport ship the Haphazard. She hasn't looked back since.

Spending most of her time in the engine room, George never feels more at ease than when she’s tweaking or repairing something. Sometimes, when particularly stressed, she deliberately breaks some non-vital component just so she can spend time repairing it. Unlike the rest of the crew, George doesn't have an assigned room; she chooses to live in the engine room and has a hammock hung there so she can fall asleep to the soothing hum of the engines. She’s rarely found without her favourite multi-purpose tool Tweakie, and a rather strange and pointy rod that only she knows what it’s for.
Posted by Chris at 21:07 No comments: 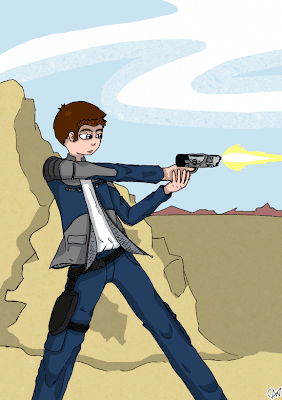 Nick is the only known human to survive the galactic genocide of the human race. He is currently operating as the Captain of a small transport craft, the Haphazard.

Born in a small dales town in the north of England, Nick was raised on Earth until his father died in an accident at the Space Corps construction yards around Luna. Not long after, Nick’s mother moved to Luna City Three, and here he met Eugene Preston, an Oretan, and Reginald Maiar, an Alexan. The three of them spent their youths causing mischief around the Luna cities.

Before his sixteenth birthday, Nick’s mother committed suicide at her workplace in Luna City Four. She had been diagnosed as clinically depressed not long after the death of Nick’s father, and Nick believed that she only kept herself going for his sake. Her death led to Nick acting more irrational, taking risks where he normally wouldn't, but Eugene and Reg stood by him throughout his own bouts of depression.

Eventually, Nick managed to pull himself together before he could do himself, or anyone else, any serious harm. Years of joyriding hoppers and hoverbikes were put to good use as he took a job pulling freight across the Sol System. This lasted six months before he was noticed by the Space Corps after pulling various dangerous stunts in his cargo freighter. The Space Corps realised that he was an exceptional pilot and offered him a choice; enlist or lose his pilot licence.

After completing his formal training, his escort assignment was interrupted by the Akiran War. After three months on the front lines, Nick became the most senior member of his squadron, and with the conflict escalating, the Space Corps was desperate for experienced pilots. Promoted to Wing Commander of the Crescents, he had to rebuild the squadron from raw recruits. The 101st Crescents went on to be the most well know fighter squadron of the entire war, defying all the odds and completing some of the most dangerous assignments. Towards the end of the war, Nick was approached to be the pilot for a special operations team called STORM. 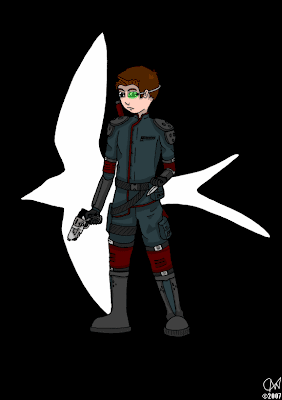 Over a period of fourteen years, STORM performed behind enemy lines, defending the GSF from those that would try to take advantage of situation with the GSF at war and during its recovery in the aftermath. This was until the incident at Callatrax VI, an incident that Nick, and Reg, are not comfortable talking about. The Space Corps officially disbanded STORM, but rather than lose the abilities of some of its best agents, the Space Corps sent them deep undercover.

After six years of near isolation, Nick decided to retire and was returning to Earth to formally hand in his notice and live out the rest of his life in peace. Unfortunately, the planet was destroyed in what is being called The Human Extinction Event, or THEE, and Nick is believed to be the last living Human in the galaxy, which has made him a target of those wishing to protect him, and those that wish to make a tidy profit from his capture.
Posted by Chris at 20:43 No comments: 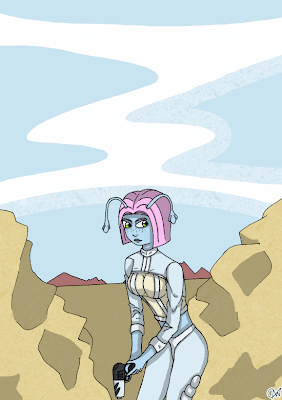 Rydra had a normal childhood, growing up on Antara with her younger sister, Ryal, until, at the age of fourteen, both her parents were killed in a terrorist attack while on holiday on the Antaran moon of Antrak. Centuries ago, Antara went to war with the Jakara and conquered their home world. After decades of dominance, the Antaran government returned sovereignty to the Jakaran people and withdrew from Jakaran space. This was so long ago that Jakara has been under its own rule since the occupation for much longer than it was actually under Antaran rule. The occupation left its mark on Jakaran society, and despite many reparations since, a small number of terrorist cells exist and continue to try and upset to ongoing relationships between the two peoples. It was during a suicide bombing by one of the more extreme groups that Rydra’s parents were killed. Along with Ryal she was taken in by her aunt Glyral, but she couldn’t bond with her aunt like her sister. At the age of sixteen Rydra ran away and tried to make her way in the galaxy alone. After years working across the galaxy at seemingly endless jobs with no true direction, she met up with Tezic Odriro while working as a waitress in a cocktail bar in the Baltin sector. He offered a direction, a life, and a family; things she’d not really had since the death of her parents.

For years everything was great for Rydra; she had a surrogate family on the Haphazard, a fulfilling job, and a loving relationship. When Tezic betrayed the crew, the family, she was devastated and didn't know what to do. Considering the average lifespan of the galactic community, an eleven year relationship isn't that significant, except to those who live those relationships.

Rather than take command after Tezic’s betrayal, Rydra decided to employ an independent captain. Over the years, Rydra has served under a number of captains; unfortunately she tended to hire captains that just couldn't hack the job or her attitude. This was until Nick, who was hired against her wishes. For Rydra, the jury is still out on Nick’s competence as captain, and regardless of what he’s told her, she still sees him as the scruffy, immature bum that she met on Mars.

The Katyten originate from the planet Ugpalo, and they are famous throughout the galaxy for their culinary skills. The most popular restaurant in the GSF is the Fat Squwarma, where there is an extensive waiting list; many an affluent parent has booked a table as soon as they know that they are expecting in anticipation of an eighteenth birthday celebration.

The most popular dish at the Fat Squwarma is the Squwarma that the restaurant is named after. Every person asked says that the dish tastes different to what the next person claims. When asked, the head chef states that it is just a testament to his skill to be able to satisfy so many customers with what they most desire, which raises the question of whether the Squwarma actually tastes of anything at all. The Squwarma is on found on Ugpalo and the hunting is heavily regulated, with only Katyten licensed to hunt the beast. 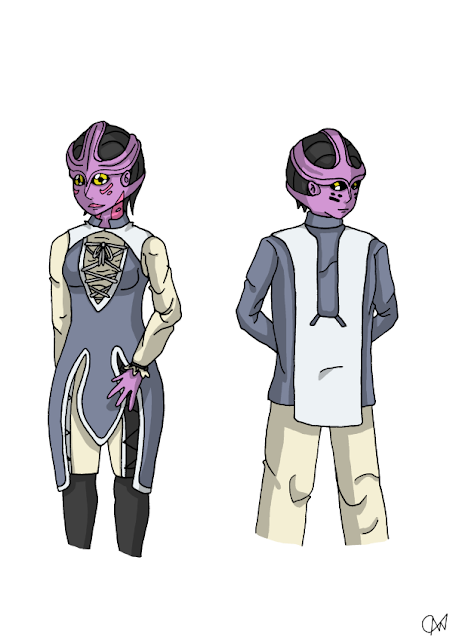 The Esdinti originate from a planet with a distinctly different atmosphere than that which has supported life throughout the galaxy. The actual composition of the atmosphere is unknown, as very few Esdinti leave their home world, and those that do only have a cursory knowledge; from what information has been gathered it is believed to be mostly carbon dioxide and chlorine. It would be perfectly easy to scan the surface of Esdin, or to ask the Esdinti directly; however, the Esdinti maintain a minimal contact with the rest of the galaxy, and the GSF prohibits the probing of advanced civilisations without their expressed permission.

Those Esdinti that do leave they home world have to wear pressurised suits as the atmosphere on Esdin is much higher than most worlds. The suits also supply a breathable atmosphere that, due to the incompatible atmospheres of most worlds, cannot be filtered indefinitely. 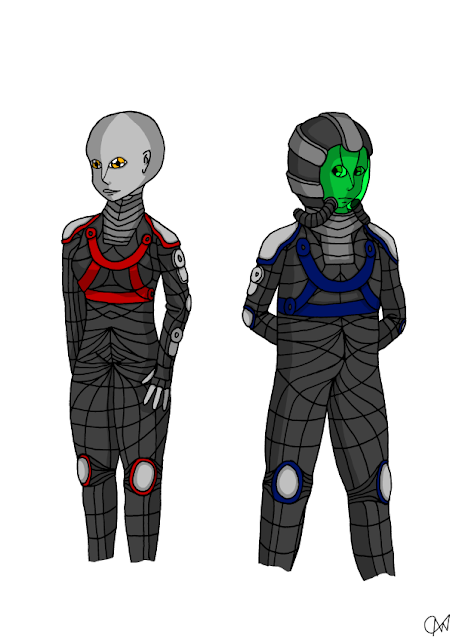 The Y’Kalians share a system with the Partheans, and although they live in relative peace, there is a constant tension between the two races.

Some decades ago, the Y’Kalians and Partheans almost went to war over an arranged marriage between the two ruling royal families. Although the full story has never been revealed to the general public, rumours abound surrounding the Y’Kalian princess and her lady-in-waiting. Another take on the story is promulgated by the spacer Arn Fuss-Duo, who told the tale of how he arrived and single-handedly prevented what would have been a devastating conflict. 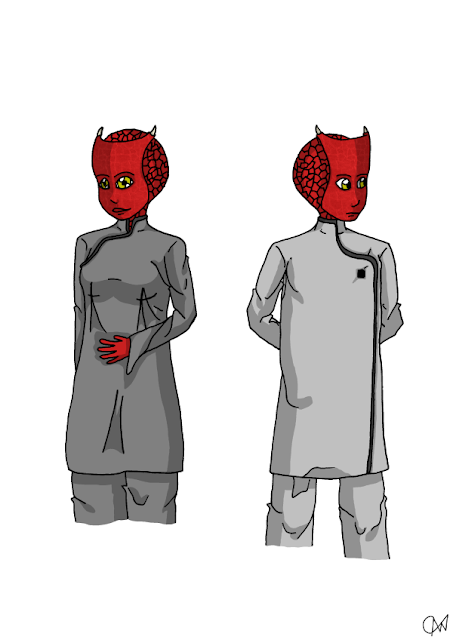 The Partheans are a warrior race from the planet Boih. Although they don’t agree with a lot of what the GSF do or stand for, they are on peaceful terms. They are not, however, on such peaceful terms with their neighbours, the Y’Kalians.

The Partheans and the Y’Kalians almost went to war several decades ago over the matter of an arranged marriage between Prince Knez of the Parthean ruling royal family, and Princess Mainit of the Y’Kalian ruling royal family. Although the incident is rarely discussed with outsiders, the story goes that the Princess refused to marry the Prince stating that “He’s just not my type,” her type being her generously buxom lady-in-waiting. 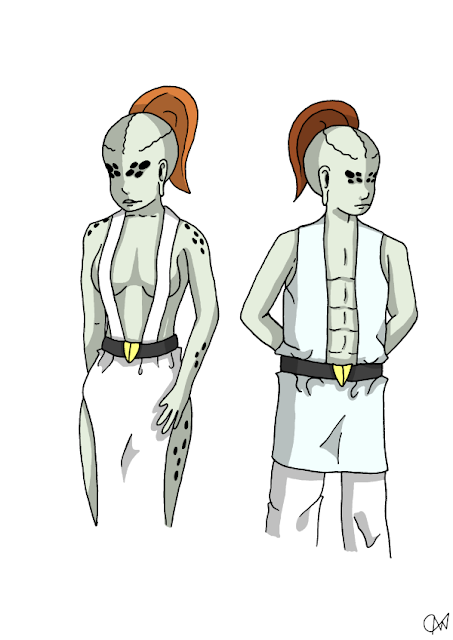